In the Zone: A Quilting Process Tale 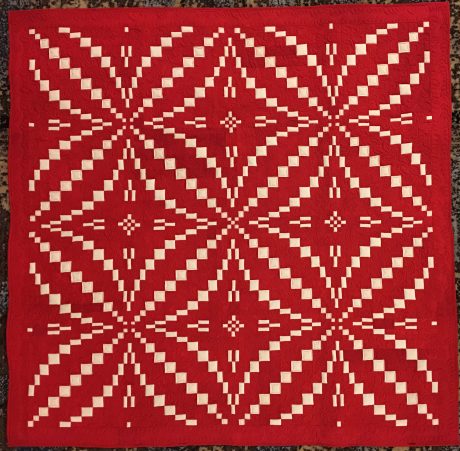 Quilting for others is something I rarely do. However, when Diane Magidson of SewBatik asked me to quilt a beautiful red and oatmeal batik quilt for the SewBatik booth at the recent Road to California show, I was, well, giddy. While simple in color, the complexity of the King’s Puzzle designed by Lois Hatleberg (Highview Quiltworks) design started quilting ideas whirling between my ears. Getting this beauty quilted was a high priority, because it was needed to showcase SewBatik’s luscious batiks at Road, which always launches the U.S. quilt show year with its mid-to-late January date.

The USPS decided that delaying my personal gratification and increasing my anxiety would be the order of the day, so Diane’s well pieced quilt top actually arrived very late. I had a tight, but manageable, window in which to do my quilting thing, and turn the quilt around.

the vision emerges
My first thought was to stitch straight lines following and accentuating the visual curves of the pattern. I can do this with my walking foot, I assured myself. It’ll be done in a jif. No problem. Diane and I agreed on wool batting as it shows off the stitching well. After spray-basting the quilt, I began the stitching in earnest, because deadlines, right? 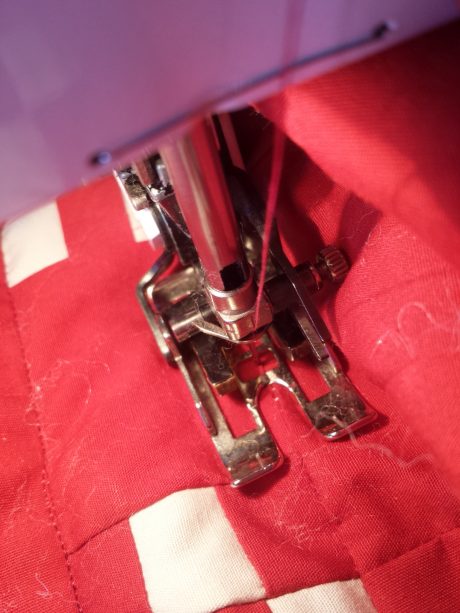 (Raise your hand if you’ve ever thought this about a quilting project. Amiright? Let’s just say every project has its lessons. Read on!)

As I was happily stitching on this red-and-white wonder, there were moments when I felt as if I was literally shoving the quilt through the machine. And I stopped periodically to lift the presser foot and reset the walking foot. (Note: This need to re-set should have been my first sign.)
For some ridiculous reason, the thought of stopping and checking never crossed my mind. Not once. Nope. I kept right on going. But when I did stop, Oh, &*$#!, to quote Debby Brown. Let’s just say it was a good thing the sewing room door was closed, and my sweetie was in bed with the radio on and therefore could not hear me because the words that escaped my lips did not sound like the kind, encouraging words that (I hope) usually dwell there.

Did I mention the shipping delay?

Ripping time! I grabbed a seam ripper and began un-sewing. Every. Single. Stitch. Not only did the quilt back have puckers and pleats that would rival the look of someone sucking on a particularly tart lemon, but the bleeping tension was off. As the Biblical saying goes: “Pride goes before a fall.” And then there’s that quilty saying: “A seam ripper is a quilter’s best friend.”

Some of the stitching came out in long lengths because of the tension problem, but I had to work for the rest in the usual manner. Four in the morning is a good time to go to bed, right?

After some sleep, I checked in with my GenQ peeps. Uh, I think I actually groused, complained and made rude comments. Grumble, grumble, gripe, complain. My exact words might have been, “I wish I’d never given Bang Head Here! ??? away!” A fat quarter size wall-hanging I gave away to a former employer. 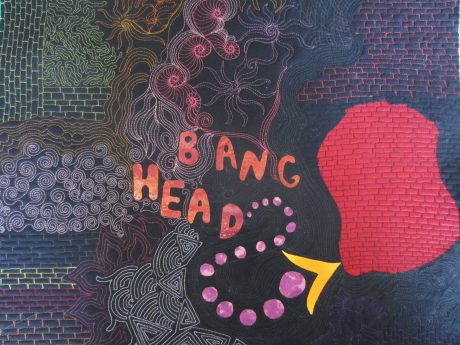 Y’all know that un-quilting takes waaaaaaaaaaay longer than quilting, even when the stitching comes out fairly easily. As the un-quilting process continued, so did the ugly what-was-I-thinking self-flagellation. Of course this stuff happens, but I’m the machine quilting teacher on staff, so it’s not supposed to happen to me! There I go, ignoring the very stuff I teach about having self-confidence, etc. Grrr.

the real vision emerges
So, time for a fresh start. I took the top off the quilt sandwich, added a second layer of batting, which I was going to add the first time around and then I ignored myself (if I’d only listened in the first place!), and began to re-baste the sandwich, adding curved safety pins for extra security.

While I worked, I tackled the again-looming question of how I was going to quilt this. What motif or motifs were speaking to me? What was the quilt asking for? (Because quilts do speak, you know). I reached back in my mental lesson plans for some basic info I teach my students about straight lines complementing curvy piecing and curvy motifs complementing geometric piecing. This gave me a guideline (not rule!) on direction.

It came to me: Feathers! Yes, some kind of feather, but which one, in which direction and how involved? The thoughts continued to churn.

While I was re-basting, I realized that stitching out the feathers without a particular plan was a way to go. And as I studied the quilt, I envisioned long, thin and dense feathers. (See my handy drawings.) 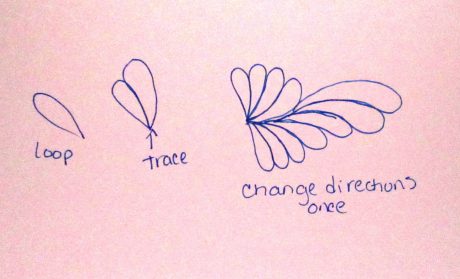 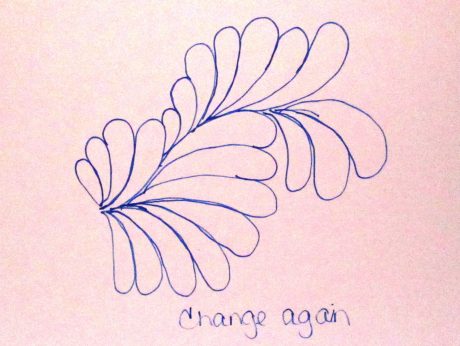 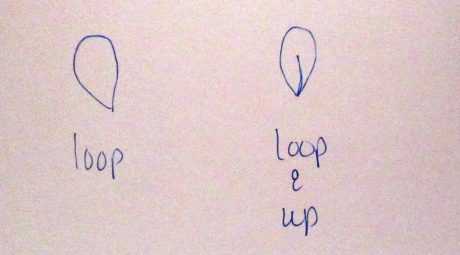 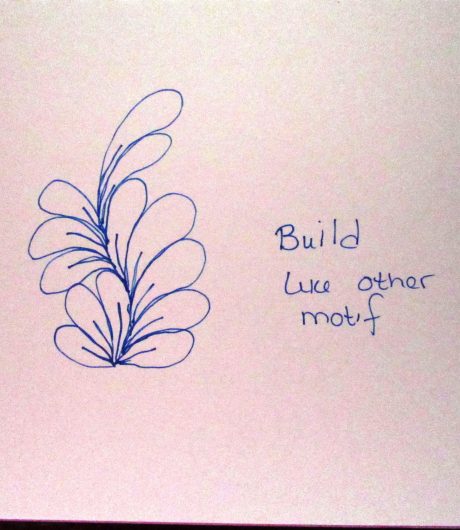 I wanted to be able to fill the space and give the viewer something interesting to look at. There’s also the fact that I get bored kind of easily and changing direction frequently keeps me interested. Staying interested in my quilting is as important to me as anticipating how to keep the viewer interested. If I’m bored, I’m not doing my best work. If I’m not doing my best work, I’m not happy. If I’m not happy, that shows up in the quilt. On reflection, I wonder if I could have avoided that late-night unsewing session by just following my gut in the first place.

I wanted to do a little bit of stitching on the oatmeal piecing that helped define the red curves, but nothing to overwhelm it; just enough so that there is consistent quilting. A little arc on each side felt about right. As the feathers moved nearer to the center of a line of oatmeal, I could arc around from piece to piece, again without starting and stopping 100,000 times. I threaded the needle and fired up my BERNINA. Things went well, and I began to believe I would make the shipping deadline. 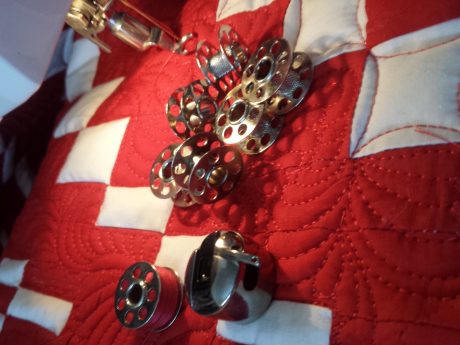 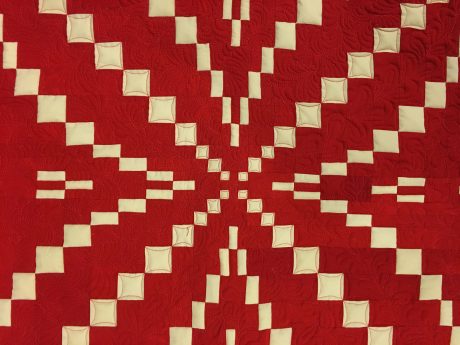 As I neared the end of the quilting the main body of the quilt, I got a wee bit giddy. Because success! Now, what would I stitch around the border? I did what any reasonable quilter would do and took a two-hour nap. The feathers seemed a good idea to continue, but I didn’t want the borders to be exactly the same. However, I also wanted them done! So, I started stitching loops with echoes, and to add a bit of interest, I added a soft curvy line into the smaller loop. On and on and on, I stitched. Loop, echo. Rinse. Repeat. Loop. Echo. Rinse. Repeat. Breathe deeply. Sip wine. I finally finished the quilting, took another deep breath and bound the sucker.

Now, I haven’t told you how I decided about thread choices. A red that almost blended into the background was something of a tough pick because I LOVE color and contrast. I like for my stitching to be the star of every quilt that I FMQ. However, this quilt is all about the beautiful batik fabric, making the quilting secondary and worth investing loads of time. For the bobbin thread, I chose Aurifil 28 wt. cotton; for the top, Superior Magnifico 40 wt. polyester. The Magnifico gave just a wee bit of sheen, and helped the quilting stand out a little bit more without completely hijacking the quilt design.

epilogue
So, Diane’s Kings Puzzle quilt got to Road in time to occupy its place of glory in the SewBatik booth. I was glad to quilt for a valued friend, but I was also grateful for the reminder of my own need for self-confidence in my inner artistic voice. That’s why I’m sharing this process tale with you. We all have quilting challenges as we hone our skills and enjoy our craft. Learn from those with more experience, sure, but don’t tune out your inner voice either, because that’s where your vision lies.

Teri, Mistress of the Blog, wee nip o’facebook, and Instagram free motion machine quilts on a regular basis. Rumor has it she a darn tootin’ good teacher, and her favorite quilt graces Gallimaufry by Generation Jones. She’ll be the featured quilter at the Dutchess Heritage Quilt Show in October. You can visit her at terificreations.com, to see more of her work and her teaching schedule.