The business side of the q-niverse is more than just product. There’s personality, which often makes a big difference in a company’s success. Contributing writer Beverly A. Mabry shares about Elena Gregotti, president and leading force behind the expanding Aurifil  thread empire.

By Beverly A. Mabry

The quilting world has been happily familiar with Alex Veronelli of Aurifil for several years, and his hard work to introduce and expand the market for this high-performance Italian thread. But did you know there’s another powerhouse at Aurifil? President Elena Gregotti.

On my way to interview Elena, I was armed with all the accoutrements one needs. A tape recorder, paper, pens and a list of questions a mile long. I wondered how I could sum up the complexities of her personality in a few paragraphs. 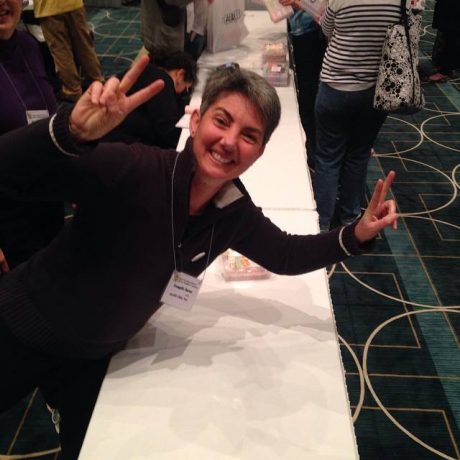 If ever I wanted an elf sitting on my  shelf, it would have to look exactly like Elena. She’s petite  and full of spunk, and there’s a sparkle coming from her that is hard to ignore. Let’s face it, I am star struck! Much like the treasures of Italy, from which she is from, it didn’t take me long to discover her rarity and significance. Even though she quickly put me at ease, I had a hard time concentrating because of her accent. Not because I couldn’t understand it, but because it lulls you. I just wanted to relax on a comfortable sofa and have her read aloud to me. As she began to tell me the story of Aurifil, it seems very much like a great novel, with struggles and successes, and the good guys win in the end. 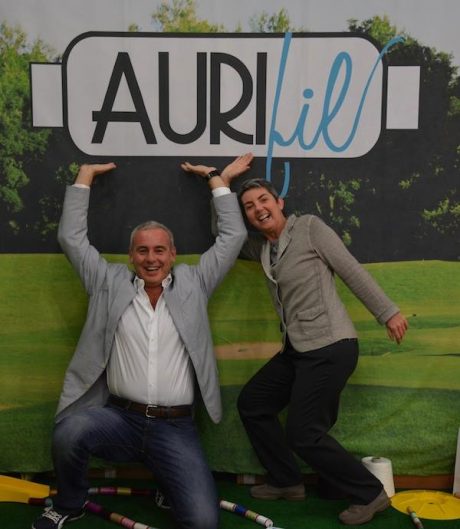 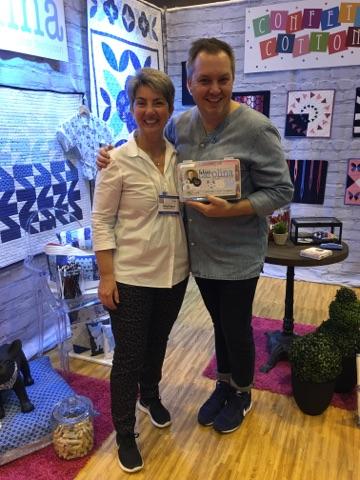 Elena with Christopher Thompson and his custom designer thread pack that coordinates with his fabric line Blue Carolina for Riley Blake Fabrics.

In 1983, Angelo and school friend Adolfo Veronelli (father of Aurifil front man Alex Veronelli) joined forces in a new adventure to produce thread. They wanted to find the best Egyptian cotton and provide their customers with the best threads on the market. Aurifil was born. Following the Italian business tradition of long-lived family companies, the second generation–Elena Gregotti and Alex Veronelli–joined the company after completing university studies. Elena focused on marketing and Alex on production. 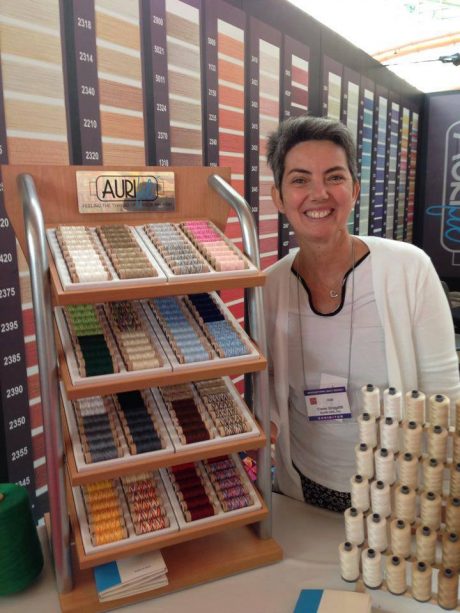 In 1995, two important things happened: 1) Aurifil and Studio Auriga appeared online for the first time. and 2) Elena discovered the quilt world. She says she was impressed and fascinated by the beauty and artistic value of this art, and lost no time proposing to her father that Aurifil should approach this market. In 2000, Aurifil exhibited for the first time at the European Quilt Show in Strasbourg, France. Elena says she remembers looking out her hotel window across from the convention center, and wondering why in the world there was this long line of women, two hours before the show started. Oh, yes. Quilters! 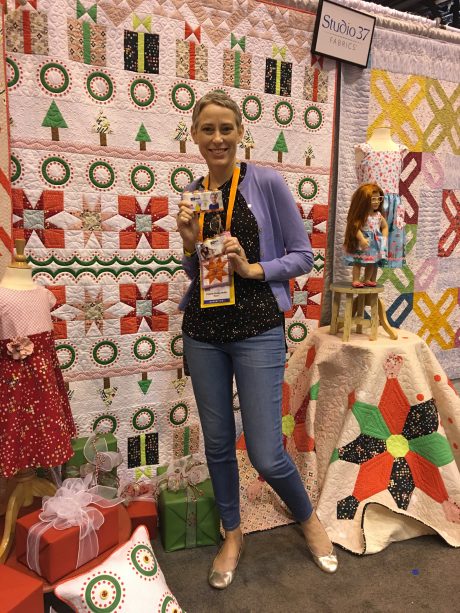 On the first day of the Strasbourg show, not many people visited their booth and they gave away very few samples. And little wonder; no one was familiar with the Aurifil name. But something extraordinary happened during a marketing seminar that day. People started using their thread. Attendees were so impressed with their samples that they started coming by the booth to get more. By the end of the second day, all the samples they brought for the show were gone. Fortunately, they were able to get a fast shipment from Milan to finish the show. It seemed the quilters recognized the quality, and Aurifil was flattered.

Based on consumer response, thought something was still missing. Quilters had said the thread quality was on target, but the packaging was ugly. Returning to Milan after the show, Elena convinced her father that they needed to redesign their packaging, wrap their threads and make their product more appealing.

The Aurifil team kept improving the product, and began to sell thread in the U.S. through an importer. In 2007, Aurifil USA was born and officially a player in the U.S. market. The company produced 700,000 spools in that first year, and by 2016, was producing 5 million spools a year, including five weights of cotton thread, as well as wool, monofilament and polyester threads and embroidery floss . The quilting market claims about 65% of that production. The company caters to that segment by creating designer thread collections curated by popular designers and quilting celebs, such as Pat Sloan and Victoria Findlay Wolfe. 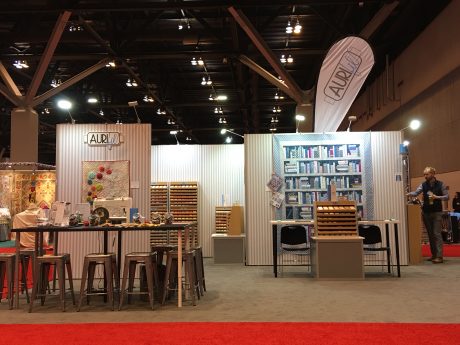 For Elena, this success has not been achieved without leaping a few hurdles, such as being a woman in what was a man’s business world. She says she owes much of her success to her father. For example, when he was starting the company, he dealt with men from a certain country that were prejudiced against women in the business world. Her father promptly told them, “if you won’t deal with my daughter, you won’t deal with my company.”  (Yay, Angelo!!)

On a more personal note, I had heard rumors about Elena’s encounter with her major celebrity crush, Elton John, and wanted to get the scoop. So, in 1996 she was visiting her sister in New York. They were strolling along an avenue and came to a shop with a beautiful embroidered bag in the window. Stopping to admire it, they decided to go inside. She noticed an entourage, and there standing at the counter,and buying a gorgeous jacket was the man himself. She says her knees got weak and she started shaking. She really wanted to ask for an autograph and so approached one of his bodyguards. The man told her to wait there and he would see what he could do. Waiting for what seemed like hours but was probably only a few minutes, her idol looked at her and smiled and  wagged his finger for her to come over. She was still speechless, but somehow managed to get the autograph and leave without embarrassing herself.

Elena loves to travel and when I asked her what’s one thing she would’ve done sooner in her life, she said she would’ve told her younger self to come to the U.S. sooner. She loves it here and now resides in Chicago. She has lost no time fitting in. Favorite food? Filet mignon, medium rare. Perfect pair of shoes? Sneakers, size 3. (See, I told you she was a elf!)

Beverly A. Mabry (Gramma Bev to many in the q-niverse) is a contributing writer for Generation Q Magazine. One of her many quilty missions, besides trying to use up her personal stash, is to send fabric, notions and batting to quilting sailors aboard the U.S.S. John C. Stennis supercarrier.

Categories In the Q-niverse (Look What…) Uncategorized