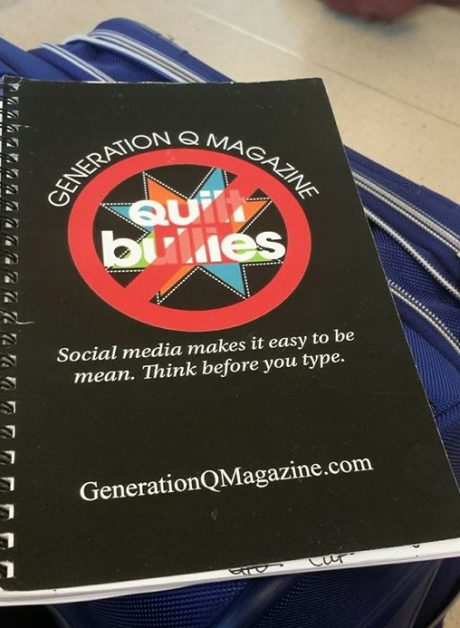 You are not the boss of us. Any of us.

That’s our message to the recently unveiled secret Facebook group of quilters who seem to have banded together to drive so-called unsavory characters out of quilting. Only thing is, their targets are talented individuals who are contributing greatly to our q-niverse and living a creative life. The only thing that turns up unsavory is this secret group.

Well, okay. Maybe “unsavory” is an understatement. It’s one thing to criticize someone’s quarter-inch. It’s a whole other terrible thing to criticize someone’s lifestyle or politics or social views in the name of cleaning up the quilt world. This group’s brutal, hateful tactics seem motivated by a desire to destroy people who are gay or look different or live a different lifestyle AND to destroy their livelihoods, at least from the quilting industry.

This secret group came to light a few days ago just as much of the quilting world was gathering in St. Louis, Missouri, for Spring’s International Quilt Market. It has since been decried publicly by hundreds of quilters, including longarm magician Karen McTavish, who is reportedly one of the group’s targets. (Her crime? Well, she’s got tatts and dreads, but we prefer to think it’s her mad skills that made the secret cabal jealous and judgmental.) Karen spoke out loudly and clearly in a Facebook live message; if you’d like to hear it, go here.

Calling out bullies and bullying has been a thing with GenQ for a while, actually. We began collecting stories of bullying and sharing them in “awareness ads” last year particularly aimed at getting people to not be so crappy to one another on social media. Here’s one: 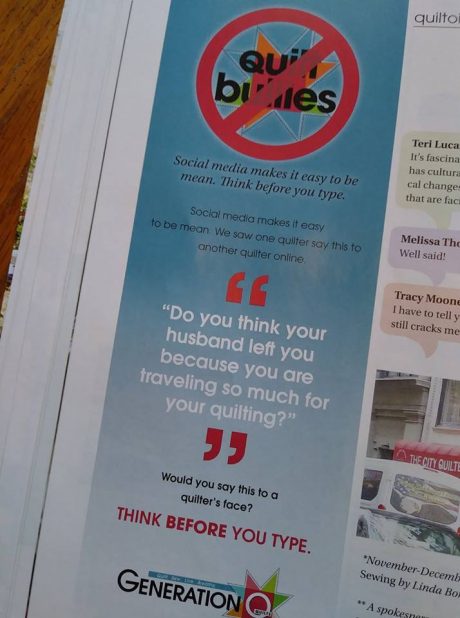 When we started this PSA campaign, we were just responding to random acts of bullying we had heard about, and trying to get people to knock it off. Just. Play. Nice. And while that meanness was bad enough, it is nothing—NOTHING—compared to this secret group that apparently has a whole different agenda. You might not like who someone loves or how they conduct their life, but it is wrong, wrong, wrong to try to destroy their careers, their professional and personal relationships, and their passion for their art.

So, we know there’s a list of these secret meanies floating around. We have seen part of it, but we’re not going to publish it. That would accomplish nothing, and would, we think, be stooping to their level. Instead we’re going to focus on the good things in quilting: the talent, the wide-open horizons of style and technique, the limitless sphere of art we can create with needle, fabric and thread. Join us? Because in our q-niverse, there is NO ROOM for people who attack others.